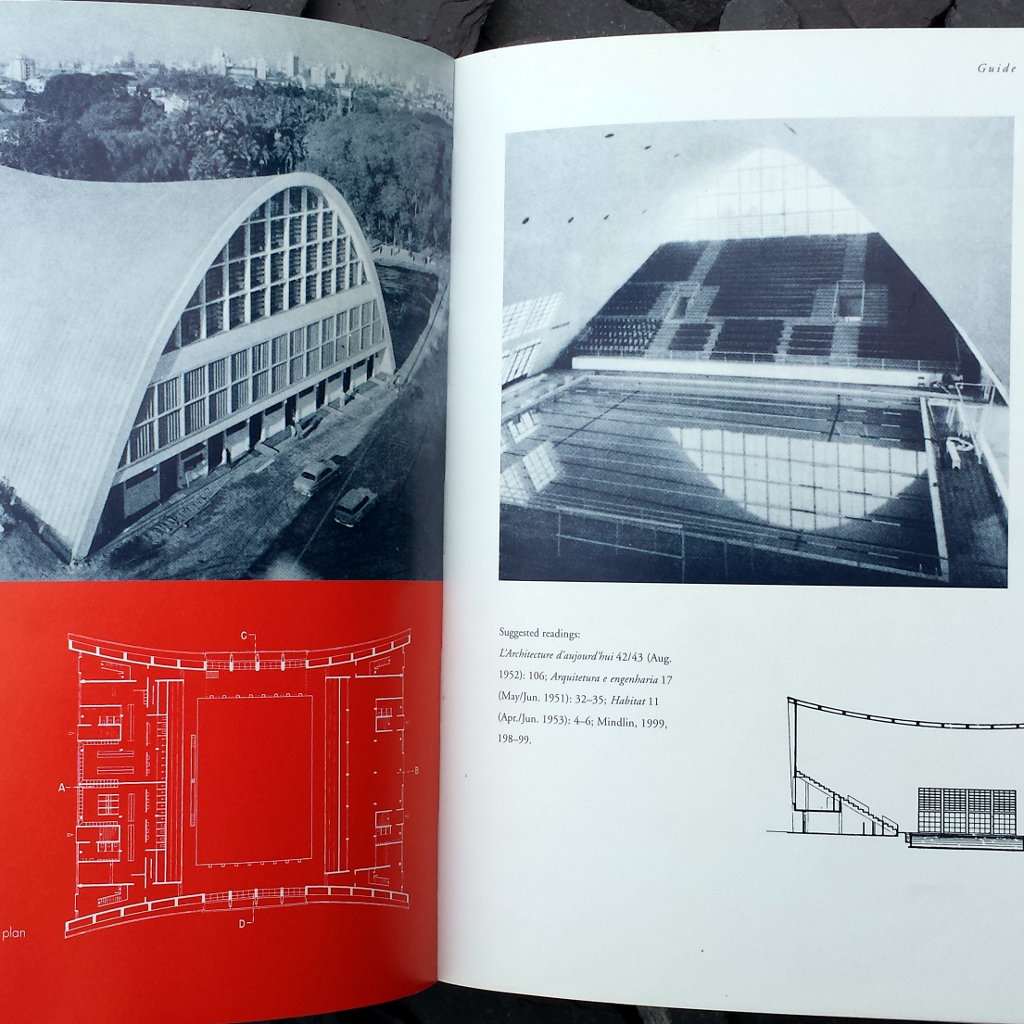 I once had a dream so I packed up and split for the city.

The Baby Barioni sports complex had been around for over fifty years when we first walked through the door in January 2004. I had spotted two black and white images in a book a few months earlier, an interior shot of its massive soft curve of a ceiling overhanging a glassy pool, facing an exterior shot of it looking a bit like a saddle with distant skyscrapers visible beyond a neighbourhood of trees. I had a sense that it might sound good inside, smoother than the usual splashy clatter, but a bit more extreme, so Valerie and I paid it a visit to see if we might absorb it into my Bienal project.

Inside, under spacious curves, we lost words to the echo of our own voices. I paced the tip of one of the two opposing wedges of concrete seating, and paused to clap a test, counting and listening for the fleshy smack to die away. One elephant, two elephant … a sound cloud before Soundcloud, an invisible plume billowing through the bright heat … four elephant, five elephant … thinning fuzz dissolving into that omni-hum from somewhere deep in the structure … eight elephant … tingling diffused and scattered, and other sounds claiming the foreground, my impulse signal and its vapour trail finally absorbed into the gelatinous air. I counted nine seconds, but maybe it was seven. Either way, a cathedral.

We rented a PA system from a local hire company. Our friend Renato brokered the deal. It arrived in a van with two guys and we asked them to set it up along one side of the pool, at the foot of the stepped concrete slope. On the opposite side, about half way up, I connected some wires to my computer and sat it on a table. One of the sound hire guys ran two long cables downhill from me, extending them back around the water’s edge to the PA amp. Then the fader goes up and the concrete parabolas are inflated with Mike Love’s voice, cut up, slowed down and rolling backwards. Al and Bruce and the Wilsons join in on harmonies, singing That’s not me. It’s acapella and digitally bent out of shape and it sounds totally unreal. We all breathe a deep sigh of relief.

A small crowd slowly arrive a little later on, sprawling themselves out across the bleachers behind me. We’re all pointed in the same direction, looking at the empty double of our seating structure, at the skyline tower lights, just about visible through the arching window across the water, and at the grain of the building, which somehow seems older and less sure of itself at night-time. I play a duet with the super-saturated acoustics. We bat The Beach Boys about between us. Fluorescent lights buzz like mad, distance rounding their treble. I break up acapella phrases, making gaps so we can hear Ícaro de Castro Mello’s geometries respond in the present, and in the midst of this rising and falling, The Beach Boys sing about cities and desire, about the tidal wave of migration that erased the countryside surrounding this compound to make a metropolis.

http://alpha60.info was Dennis McNulty’s project at the São Paulo Bienal in 2004. The project’s commissioner was Valerie Connor. Thanks to Jenny Haughton, Alvaro Petrillo, Renato Patriarca and Carlos Farinha. Produced with the support of The Arts Council of Ireland.

Dennis McNulty’s work is generated through an investigation of embodied knowledge in relation to other forms of knowledge, often in the context of the built environment. Beginning with detailed research of various kinds, and informed by his studies in psychoacoustics, the works often take hybrid forms, drawing on aspects of cinema, sculpture, sound and performance.